STPI Gallery is pleased to present Paper – Sight by Japanese artist Shinro Ohtake, marking his extraordinary endeavour in print and papermaking. Against a vast oeuvre of drawings, collages, paintings, large-scale assemblage pieces, architectural projects and experimental noise bands; these print and paper explorations stand out as important feats that have led to the realization of new ideas.

This exhibition harks back to the basics of Ohtake’s practice, which consists of collecting, chronicling and re-presenting the contents of life and time. In other words, “a collaboration with ‘what’s already there.’” While his characteristic style of amassed content and “pasted pictures” remains largely apparent, recurrent themes and motifs of nature and found images culled from the artist’s daily life are effectively appropriated in new material, techniques and striking colour palettes, reshaping our experience of them.

The use of neon yellow is particularly striking in the gamut of colours and imagery here. Referencing uranium (“yellowcake”) and radiation, it emanates Ohtake’s preoccupation with a sense of life’s transience following the March 2011 Great East Japan earthquake and Fukushima disasters. As recordings of the event and subsequent radioactive contamination, the works are a response to concerns around nuclear energy, threats from nature, considerations of the earth and the universe, and relations between families and homes affected by the disaster.

Yet as writer H.G. Masters highlights, rather than projecting a specific narrative, Ohtake’s process of accumulating discarded urban materials to form a “compulsive and fragmented archive” stems from a deeper interest in the strands of time embodied in each material.

“The way I work strongly relates to a contemporary sense of the being of time. It’s not that there is always only ‘joy’ in the being of time or in the layering of time, but there is a ‘being of density’ connecting them to which I respond. This is a phenomenon that occurs in the relations between the time of the present flowing in different directions, at different speeds and at different depths, and the layers woven together by the time of the past, and the feelings and sensibilities of the people whose lives unfold within those layers.” – S.O.

As works like Book #1/Layered Memories and the Yellow sight series illustrate, it is this dense layering of multiple times existing in one moment that Ohtake seeks to capture beyond just mere recording of the times, as it were.

But this body of work also reflects the very core of his practice. Writer Tomoko Yabumae suggests that the procedures and implications of printmaking—the concept of establishing the “copy” as the “work,” rather than the “original” (mold/plate) itself—fittingly mirror Ohtake’s practice of working with ‘what’s already there,’ as he extracts his “work” from the world around us as they are. Printmaking, as such, has become a metaphor for his methodology as an artist.

At STPI, Ohtake investigated this relationship further in works like Black Wall, where vinyl records—themselves, prints or copies—act as plates for the transference of ink and imagery, as well as parts of the final work. This correlation is elaborated in the Indigo Forest series, where Ohtake works with ‘what is already there’ within him to create lithographs based on his memory of the forest in Kassel.

Through this expanded notion of printmaking, and a thoroughly bold and unapologetic body of work, Ohtake makes the existing material of the world visible once again, and grants to us a new way of looking at the world.

This exhibition is held in conjunction with SG50, commemorating the 50th anniversary of Singapore-Japan diplomatic relations, and made possible with the generous support of our Friends of STPI. 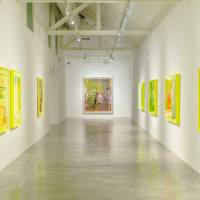 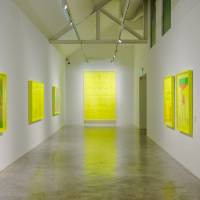 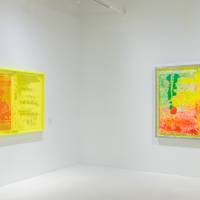 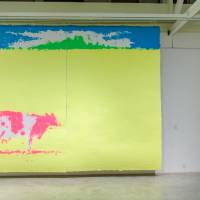 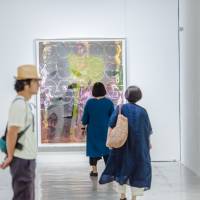 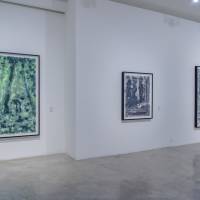 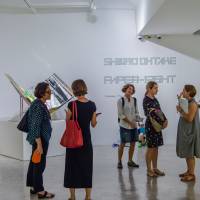