This jubilee year, STPI is proud to present its annual special exhibition titled As We Never Imagined: 50 Years of Art Making, featuring some of its best collaborations with notable artists of our generation, and prints from the National Collection that demonstrate the potential and development of print and papermaking over the last five decades. Referencing 20th century collaborations between American printmaker Kenneth Tyler and the biggest names of his time, the exhibition celebrates art making in Singapore and considers the inimitable explorations that the homegrown institute has taken in paving its own journey of propelling art making to greater heights and conceptual frontiers.

That the medium of print could ever reach such soaring heights as it has today was unimaginable fifty years ago, not in the bustling art hub of New York in the sixties, not in Southeast Asia, much less in Singapore. In 1965, printmaker Kenneth Tyler began an extraordinary journey of collaborations starting with esteemed Bauhaus artist Josef Albers, at a time when it was inconceivable that a print could rival paintings or sculptures.

In the next thirty-seven years, the artist-printer relationship achieved unprecedented scale and technical complexity in print, freeing up traditional notions of the medium. Their unique vision and styles resulted in works that pushed material and technical boundaries, subverting the widely held belief of the subordinate role of prints in the fine arts, and paving the way for whole realms unimagined.

Rosenquist attained prints of towering proportions that rivaled the magnitude and vitality of his paintings. Oldenburg’s editioned print titled Profile Airflow was noted for its three-dimensionality and application of industrial processes. Mitchell translated her painterly vision onto oversized prints that resembled her large canvases, a feat for the artist given the methodical and intentional process of printmaking. Similarly, Motherwell published El Negro, an ambitious undertaking of nineteen gestural lithographs that illustrated the poem “El Negro Motherwell” by Spanish poet Rafael Alberti. Stella’s incessant explorations led to ‘buildable’ prints like the Moby Dick series, which traversed media with multiple layering of techniques and printed surfaces, commanding a visual presence analogous with his paintings. At the cusp of this print resurgence, big visions were materialised – and the rest was history.

AS WE NEVER IMAGINED: OUR STORY

These exhilarating experiences resonate deeply with the individual journeys artists have taken at STPI. Through a vivid exchange of ideas, multidisciplinary techniques and life experiences, the artists and the STPI team jointly modify methodologies, breaking material and conceptual boundaries as they embrace challenges that dog the creative process. At the end of the residencies, concepts or visual vocabularies are further enriched and transformed. For some, the encounter would have led to breakthroughs and new directions in their artistic practice, while others, a trajectory of Singapore-inspired works.

Thirteen years ago, no one could envisage how this endeavor would unfold. In 2000, the Singapore government set in motion measures to position the nation as the prime arts hub of Southeast Asia. With the establishment of institutions and creative spaces like STPI, not only has Singapore seen the birth of a playground and laboratory for creative outputs, it has also seen a proliferation of expression and approaches, especially in Asian and Southeast Asian art, that contributes to the wider dialogue of contemporary art and an enduring legacy of collaborative projects.

Today, the institute has evolved into a dynamic space where artists from all over the world pursue pathways hitherto trodden by imminent forerunners, in a shorter period of time with a variety of approaches, and in a set-up that enables broader possibilities and room for experimentation.

While the developments were first made possible through these creative giants, the goals of artist-printer collaborations today are not bent on producing “largeness” or works that are comparable to an artist’s existing practice. Rather they employ specific techniques and work the medium to its fullest potential as springboards for the creation of fresh and unique art forms, expressing concepts informed by 21st century concerns.

The exhibition is divided into six sections according to techniques, highlighting leaps taken to articulate concepts synonymous with the stylistic sensibilities of artists today, transforming perceptions of print, paper and art making for audiences and practitioners along the way. 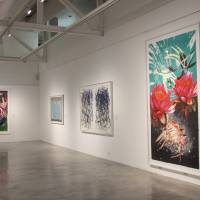 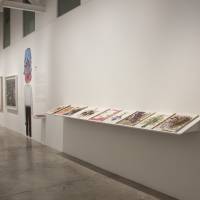 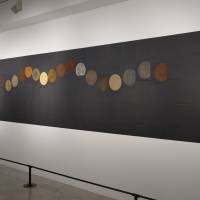 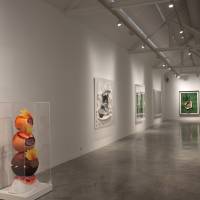