Having worked across various media like painting, sculpture, drawing, video animation, and public art since the early ‘80s, Shirazeh Houshiary’s oeuvre engages us in a phenomenological understanding of space, while evincing a labour-intensive process in the making of her art. Encompassing notions of presence and absence, these non-representational works often teeter on the edge of perception, playing with organic and architectural forms and motifs. Ever attuned to the vicissitudes and lessons of art history and the inspiration offered by classical texts and poetry, Houshiary’s references pay tribute to a creative sensibility that has slowly internalised the outside world. Here time, space, light and breath are fully embodied in everything this artist pursues and offers up as an experience.

Houshiary’s sound and video environment Breath (2013) invites us to circumambulate a cubic volume, black without, white within, emanating sounds of pulsing prayers sources from four of the world’s major religions: Buddhism, Christianity, Judaism and Islam. These chants are distributed such that each one rises and can be heard on the outer rim of the cube independently, whereas within, they ebb and flow and culminate in the center of the space, as when the tributaries of a river finally meet the sea.

To relate architecture, volume and sound to human presence, Houshiary places four video screens at eye level, with their individual size relating to the portrait and breath. As they face one another, one on each wall, the videos display animated images of human breath. Originally based on a Houshiary drawing, now abstracted to its purest form, the images are choreographed such that they rhythmically follow the inhalations and exhalations of the singers themselves. For the artist, the patterns and relationships between the breaths are of central importance. She likens the four differing techniques and measures to the four elements: the Buddhist as air, Islamic as earth, Judaic as fire, and Christian as water. The physical and astral planes of the singers’ bodies and spirits are intimately bound to these recitations and bring us closer to our own heart centres and atomic vibrations. Houshiary states, “I feel that all cultures have started and developed from their prayers and breathing. This work is an observation on the differences that exist between cultures and how a seemingly insignificant prayer can become so central to the development of culture and consciousness.” With the physical and sonic coalescing of breaths, voices, tones and musical notations achieved in Breath, one starts to notice the centralising agency and power of the human breath, which transcends these cultural differences.

Here anima (the soul, vital principle, spirit), and animation (the act of giving life, state of vivacity, technique of making inanimate objects move) are etymologically, technologically, and existentially related. Each involves stillness and movement. The relation between these two is of fundamental importance, as we slowly come to realise that everything is in constant flux around a nucleus that is absolutely silent.

Akin to looking at hundreds of tiny droplets of vapour, Houshiary’s pointillist rendition of breath is a subtle distillation of the life force that marks time and defines space. In seeking the invisible and intangible and attempting to give it form, Houshiary’s installation follows from a life’s practice wherein the sense organs and the mind have been intimately woven to breath. As we stand facing the videos, we realise that we are not unlike the singers themselves, bound to this common condition of human existence. Shrouded individually and collectively within the breathing walls of the cube – this cave, this house, this site and this tower are none other than personified abstractions of the human body, which in itself is simply a form through which the formless perceives, senses and feels. Our projected fantasies are in and of themselves unreal. Our breath is the first reminder of this.

Cast off the sense ‘I am this body’d shell.’

Seek always the real Self of Ceaseless Bliss.

That man who strives the Self to realise

Through the perfection of the body, he

And seated on it hopes to cross the stream.

We are indeed more than the body, the mind and the intellect. We are more than this breath, this sense, this vision, this perception, and this touch. The Self resides in silence, a witnessing consciousness that is innately complete, contented, playful, and eternal.
Houshiary’s installation is a synthesised and evocative worldview representing the possibility of starting to let go of our initial frames of reference, so that we can each begin to be guided by our breath, and finally establish the trust and solace that can only be found in deep solitude. That an artwork can enable such an inquiry is a testament to the magical reckoning that such encounters provide. – SANDHINI PODDAR 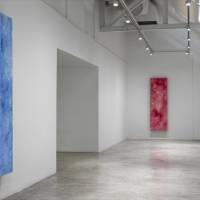 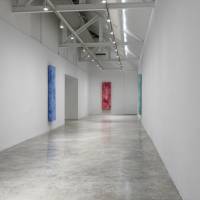 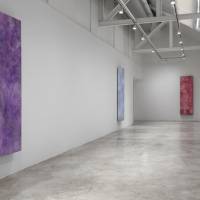 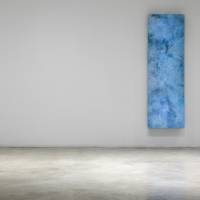 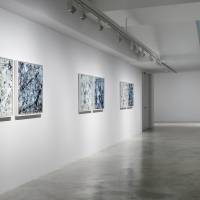