Composed around visual charades and unusually assembled objects, works by London-based conceptual artist Ryan Gander are catalysts for thinking, challenging established notions and viewer perceptions. Strung together by associative thought processes that juxtapose the commonly overlooked with the esoteric, Gander’s work solicits viewer participation, questioning language and knowledge, and reinventing modes of creating and presenting an artwork, with a tinge of humour.

Portrait of a blind artist obscured by flowers presents Gander’s latest project in the terrain of print and papermaking – previously unchartered by the multidisciplinary artist. This three-week exposure stirred him towards developing a body of work that tells the story of print by examining its processes and history.

Another look at the twin pedestals titled Meaning is without nothing will reveal stains that are indeed ‘prints’ which mimic traces of paint accidents accumulated on tables and shelves in the STPI workshop. Their mirroring of each other denotes the idea of print as a copy. Yet this perception is quickly debunked in the rest of the show where Gander pushes print boundaries.

Gander began his residency at STPI in May last year with several materials or “start points”, including his five-year-old’s Moleskine notebook of folded and cut pages with punched holes and shapes – the inspiration for The redistribution of everything that is good. Scanned page by page and laid out on an aluminium printing plate for full viewing at a glance, the work points to the printmaking process, and the potential it carries for endless distribution of mass-produced printed matter. It also revisits the moment where her creativity (stemmed from “childhood naivety”) “totally altered the perspective on the notion of art making, mark making and book making” to produce “an unexpected masterpiece”.

Much in the same way, Gander altered perspectives on the notion of printmaking through works such as his unique self-portraits. In Portrait of a blind artist obscured by flowers, Gander references the concept and composition of German artist Gerhard Richter’s portrait called Betty. With his back to the viewer and his profile hidden by flowers, the work inverts the idea of a portrait that is traditionally meant to be a truthful representation of the sitter. Yet the inaccurate colour registration and combinations are actually “as intimate as a self-portrait can possibly be”, based on his “perception of what is right as a colour blind artist”.

Fascinated by the possibilities of the medium, Gander was led to reflect on the history of printmaking, resulting in fresh interpretations of iconic works such as Katsushika Hokusai’s The Great Wave off Kanagawa. His own rendition titled Hokusai’s blues depicts his research on the wave in the background in a coat of Prussian blue, the same synthetic pigment that Hokusai used in his print. Combined with the use of natural indigo pigment in the screen-printed image of the Indigofera plant, from which the ink is derived, Gander marks the shift in print history where ukiyo-e artists began to use the European imported hue in their woodblock print creations.

The relief print series Seriously Retinal / Serious Poke pays homage to the Modern painter/printmaker Henri Matisse, with reference to the composition and colour palette of his paper cutouts. Here, Gander subtly implicates STPI’s rich printmaking lineage by adopting scavenged French curve rulers from the workshop in its configuration. A world you don’t want to rattle, or We go dark for about twenty-one days (Pacific) builds upon the idea of the legacy by canonising STPI’s lithography stones.

Gander further visualised STPI’s printmaking history and the progression of time in “Crooked finance… Gradient economy… Every colour left…” by using leftover inks from various residency artists in his study of gradation. Adopting the format of a printer’s technical chart, these inks were screen-printed on a scale of 1-100; accompanied by a record of the dates and printers’ initials, they indicate the sequential accumulation of inks, time, labour and practice.

The passage of time is further highlighted through motifs of clouds developing in the eight-panel screen There are people having more fun with prostitutes, or Toki no nagare, 2014 drawn from the storytelling techniques in traditional Chinese and Japanese scrolls. Works such as Having existed before it was made and As serious as a heart attack likewise record the accumulation of time through scores that imitate scratch marks on police cars, positioned here as a natural act of ‘print’. 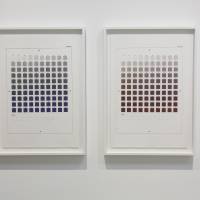 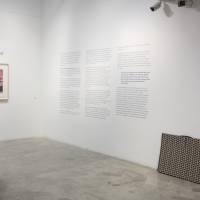 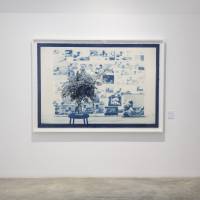 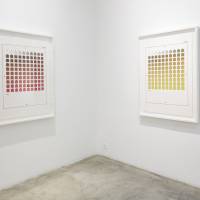 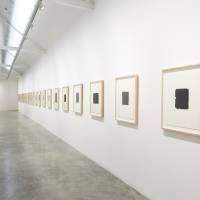 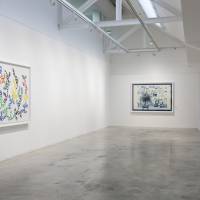