In ‘Time Travelers Chronicle (Doubt): 2014 – 802,701 A.D.’, Rirkrit Tiravanija leads viewers in time where the future is chromed and time, irreversible as we know it, is now freed from absoluteness and experienced afresh in all its possibilities.

Inspired by H.G. Wells’ dystopian novel ‘Time Machine’, Tiravanija constructs narratives of time and space through a series of time portals built during his residency at STPI.

Time travel has been a critical element in Tiravanija’s work; and for the past decade, he has used elements from the popular cartoon SpongeBob Squarepants as metaphors for the possibility of crossing time and space. Here, he utilises language as a means to unlock the imagination and facilitate a deeply personal understanding of the subject.

Images of clocks, moons and sundials with explicit references to the experience of time in their titles, engineer a poetic journey where the past, present and future converge. Donned in silver, this body of work mimics the liquidity of a mirrored surface that reflects and absorbs its surroundings, distorting perceptions. The vastness of time is captured and collapsed into a single encounter.

With these narrative tools, Tiravanija considers the textured nature of time, diverse and chaotic yet capable of developing our consciousness of time and existence.

Born in Buenos Aires in 1961, Argentina, Tiravanija is one of the most influential artists of his generation. Blurring the line between art and life, he often combines traditional object making with public and private performances, teaching and other forms of public service and social action, using collective participation as a means to activate his art. 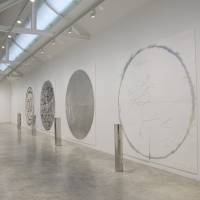