“The evening Wu and I first met, we talked together about art, and the language we used was English with drawings. I told Wu that I had that summer seen a Duchamp show in Paris, that I really loved his work, and had gotten the idea to dialogue with his ready-mades, by simply bringing them back into use…”

Conceptualist duo Inga Svala Thorsdottir (Iceland) and Wu Shanzhuan (China) have been working collaboratively since they met in 1991, starting with a photo work titled ‘An Appreciation’, where Wu urinated into a replica of Marcel Duchamp’s Fountain to restore the urinal back to its original purpose. This later led to the establishment of the ‘Thing’s Right(s)’ constitution in 1994.

“The Printer. The Paper. The Layer. The Thing’s Right(s). The Little Fat Flesh.” presents the artists’ evolving humanist ideology on print and paper. Theirs is a peculiar language built upon years of formulating conceptual tools that challenge accustomed beliefs and our relationship with the environment.

Wu Shanzhuan is one of the leading figures of the 1980s pre-Tiananmen Square generation of Chinese Conceptualists, and Inga Svala Thorsdottir started Thor’s Daughter’s Pulverization Service in 1993 reducing all things back to its powder form, and is the founder of BORG (1999). They live and work in Hamburg, Shanghai and Reykjavík.

The artists’ major collaboration of 1994 titled Thing’s Right(s), presented in this exhibition as “Thing’s Right(s) Printed 2013”, finds its predecessor in earlier works – “Thor’s Daughter’s Pulverization Service” (1993) and “Red Humour International” (1990) – wherein the value of art and the meaning of its making were explored through the purging of cultural projections. While Thorsdottir pulverized objects, Wu employed the Chinese script and language as a means to question the meaning of artworks and authorship.

The constitution eradicated the concept of man as the measure and centre of all things, asserting the rights of objects, and achieving equal treatment and attitude to all things. “Thing’s Right(s) Printed 2013” is a compilation of the thirty articles overlaid with selected images from their practice. These ideas are a springboard for their concepts today.

During their residency, the artists focused on expanding the “Little Fat Flesh”, which was the result of their investigation into how base units such as a line, shape or pattern – from which all physical forms in the universe are comprised –acquire their meaning.

The polygonal shape itself was derived from the artists’ foundational symbol Perfect Bracket (1992), which is defined by the overlap of both arcs of a bracket, and subversion of common thought for brackets to include or exclude anything.

Arctic Fox
The enigmatic arctic fox is recognised for its adaptation to changing arctic conditions. Applied here, the arctic fox draws attention to the beauty of ecology and evolution of nature, and it embodies the artists’ concern of human impact on nature.

“World Map – Arctic Fox Arc-Temperature War” presents the possibility of Earth’s recovery through the artists’ symbolic illustrations on maps to make counterpoints on the ‘temperature war’ and ecological threats today, and communicate an appreciation of life. 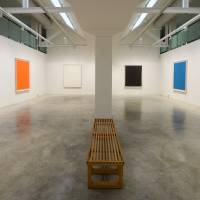 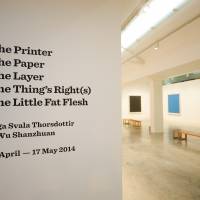 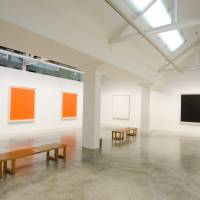 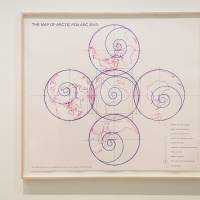 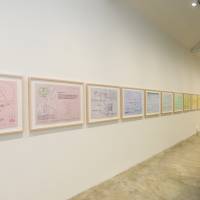 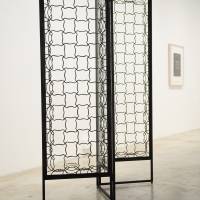