Universally resonant yet rooted in cultural milieu; Indonesian contemporary artist Entang Wiharso creates provocative works that speaks volumes about the human condition. From issues of power, loss and love to broader categories of ideology, philosophy and identity, Entang delivers personal reflections and social critique by integrating Javanese narrative tools of wayang kulit (shadow puppetry) with contemporary materials. Better known for his performance art and monumental aluminium sculptures, reliefs and installations; Entang’s ventures in the two-dimensional forms of painting, drawing and print have remained an abiding practice of his.

Never Say No presents the diversity and scale of Entang’s residency at STPI, where alternative methods and materials like balloons, yarn, wires and nails were used in the print and papermaking process. His explorations with the multifaceted medium led to a comprehensive body of work that projects customary themes through his trademark visual vocabulary of contorted, hybrid bodies – with slogans and icons of tropical plants, weapons and fences, amongst other things – as well as forms never before seen in his artistic oeuvre.

The statement ‘never say no’ denotes conflicting notions of dominion, power, tolerance and interpretation. “It is about the need to stand up and challenge dominant paradigms, the tide of tradition or an entrenched mindset that controls our perception of what is possible and what exists.” It also implies passive acceptance, and an ironic helplessness where the one who always says ‘yes’ is unable to express individual desires – a condition that Entang deems symptomatic of traditional Javanese culture. Against this backdrop, Entang’s eighty new works unfold.

For example, in Under Protection for 24 Hours, Entang continues to explore relationships and intimacy, building upon an existing composition of him and his American wife bound by their long braids. Here though, the couple is depicted enclosed in a surveillance room with a rifle between them. A commentary on “violence and heightened anxiety,” the work is a reflection on his own experiences of insecurity in Indonesia where cultural and racial conflict still persists.

Entang reinvestigated concepts under new conditions at STPI. Arriving with some ideas and materials ready for experimentation, he soon discovered how he could effectively marry them with specific processes as his residency progressed.

The paper-casting technique was heavily applied using a number of molds from previous metal relief works, such as in the Black Goat vs. Identity Crime and Aesthetic Crime: Comic Book Series, which emblematically underscores his contested position in the art world. Alluding to the position of an outside (black sheep) and a scapegoat, the “black goat” is a self-constructed identity through which Entang spins a strong critique of social norms.

The adaptive nature of paper pulp led to the reinterpretations of ideas and imagery in Art as Gift: Comic Book Series and Home Sweet Home. Materials like threads of soft yarn, paint and gold leaf were added to lend the narrative texture and colour – bringing his figures to life. Entang also combined various print techniques to give his reinvestigations “a different feel.” The recast relief work Body Text: Aku Akan Berlindung di Wajahku is covered in a collage of individually etched images, elevating its textural and figurative qualities.

In the Never Give Up, Shelter, and Her Shifting Identity series, Entang embraced the unexpected, employing new approaches such as relief printing and stencil colouring techniques in his treatment of paint. This led to an ethereal eruption of interwoven fibres and effervescent colours that the paper simply “drank” as he dropped, sprinkled and splashed paint.

Besides these evolving yet prevailing subjects, Entang embarked on a new trajectory creating works such as the series Art History: Blue Moon and Far Far Away Land that are both visually and conceptually dissimilar to the dense compositions typical in his works. Produced in the more “classical” printing techniques of lithography and relief print, their minimal and serene compositions was borne out of sentimentality for his family and second home in the United States.

The four-panel Self Portrait and Decoded series signal the greatest departure Entang has taken thus far at STPI. Laid out brick by brick, these works explore the notion of borders and division. Comprising of images sourced from the Internet, and screen-printed onto laser cut acrylic tableaus, the individual pieces in Self Portrait provide a handheld glimpse into a moment close to Entang’s memory. In its entirety, the work contends with the projection of self that, according to the artist, is no longer authentic in the digital age. These combined fragments are both a juxtaposition and projection of himself, against images and texts associated with the shared memories of others. 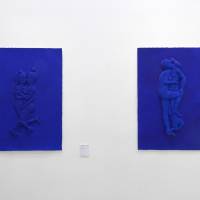 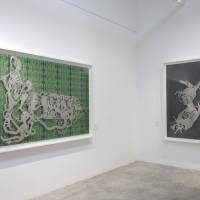 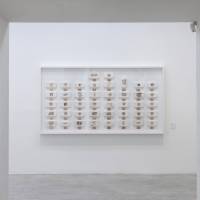 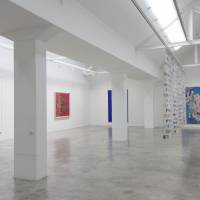 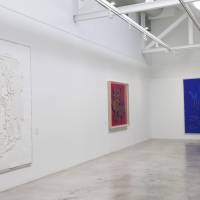 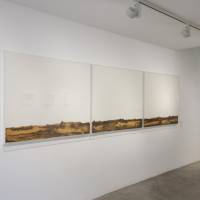 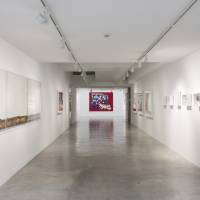 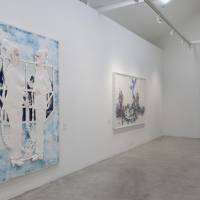