STPI Summer Show, “David Hockney: Through the Eyes of the Artist”, features works on paper from one of the greatest living British artists. Recognised for portraits of family and close friends, vast landscapes, and chic portrayals of Southern California, Hockney’s works demonstrate his versatility as an artist who takes inspiration from everyday experiences.

A rebel among his contemporaries, Hockney refuses to be pigeonholed in a particular medium or artistic style. His drive towards challenging conventions began at an early age while studying at the Royal College of Art, London and culminated in his works through his vibrant use of colours and perspective.
This exhibition focuses on Hockney’s later prints from the Singapore Art Museum’s Tyler Collection. Their scale and visual composition is a testament to the artist’s daring nature to push the medium as well his own abilities. Looking at the reversed perspective in his Hotel Acatlan series and interiors, along with the Picasso inspired portraits of Celia, Mother, and Gregory, one can know how Hockney’s portrayals of the people and places are transformed from mere representations to expressive mode of seeing and experiencing his art.
David Hockney was born in 1937 in Bradford, Yorkshire. Hockney attended the Royal College of the Art in London from 1959-1962 and it was during this time in school where he completed his first series of etchings, The Rake’s Progress (1961-63), inspired by William Hogarth’s set of prints from 1735. In 1964, Hockney moved to Santa Monica, California and began his collaboration with Master Printmaker Kenneth E. Tyler at his workshop in Bedford Village, New York, in 1978, where he produced a series of twenty-nine paper pulp works entitled Paper Pools.
Hockney’s works have been shown internationally in numerous museums and has had major retrospectives at the Los Angeles County Museum of Art, Museum of Fine Arts, Boston, Metropolitan Museum of Art, New York, and Tate Gallery, London, just to name a few. David Hockney currently lives and works in Los Angeles, California, and London, England. 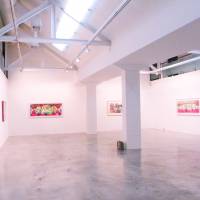