About the Artwork
Blue in red is a work on paper suggesting a transition taking place between three compartments of coloured space. This transition appears as a dancing presence hovering over the compartments as if it appeared to have been released from within the three demarcated spaces.

About the Artist
Ian Woo is an artist working in the language of abstraction. Influenced by forms of modernism, perceptual abstraction and the sound structures of music improvisation, his work is characterised by a sense of gravitational and representational change. He often uses the term ‘picture making’ when describing his position and approach, maintaining the discipline and evolvement of painting as a vehicle for pictorial reflectivity.

Woo has exhibited widely on an international level. His works are in the collection of major institutions such as ABN AMRO, Singapore Art Museum, The Istana Singapore, The National Gallery Singapore, Suzhou Center, UBS, and the Mint Museum of Craft & Design, USA. Woo’s paintings have been featured in the publication Art Cities of the Future: 21st Century Avant-Gardes, published by Phaidon in 2013. Since 2016, he has been part of the painting collaborative Impermanent Durations- On Painting and Time.

Woo lives and works in Singapore and is represented by FOST Gallery, Singapore.

Profile image by Dylan Woo, courtesy of the Artist 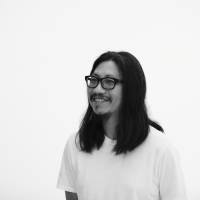