About the Artwork
“Sim is my paternal cousin- thirteen years older than myself. A fiery, ambitious woman and mother of three. Even from my earliest memory, her hair is black and brilliant, whilst each strand was delicately fine. The series is a homage to the women I love and admire dearly, who all coincidentally, also had beautiful black hair. Instead of the first names, each work is named after the birth surnames of these women.”

About the Artist
Odelia Tang is a visual artist. Tang’s art practice negotiates a variety of thematic concerns including pain negotiation, the unconscious, identity, and the abyss through installation, painting and drawing. Tang considers pain a universal language that haunts the mind and body long after the disappearance of wounds, and seeks to articulate concepts of it into material forms in order to liberate herself and the viewer of them. 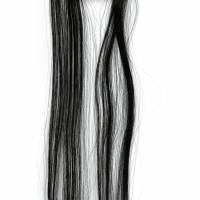 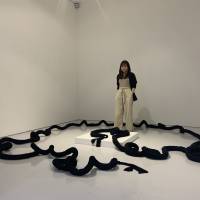