About the Artwork
Ong Kim Seng’s watercolour paintings have long been regarded as emotional and psychological portraits of the land, and Singapore Riverbank of Old is no exception. A blanket of daylight envelopes the quotidian architecture and figures along the street, demonstrating the artist’s keen rendering of light and shadow as they permeate the picture. Ong’s distinct watercolour vocabulary is one that amalgamates his wide-ranging influences and sensitive interpretations of a shifting landscape. This enables one to encounter a nostalgic scene of the Singapore riverbank in a refreshing, lyrical expression.

About the Artist
Acclaimed watercolourist Ong Kim Seng (b. 1945, Singapore) is described as the ultimate ‘maestro of light.’ His signature style is marked by a consummate handling of light and shadows in his pieces, sensitive composition, and meticulous detail. As an avid traveller to natural landscapes around the world, Ong is known for his sensitive grasp of the intricacies of each culture and present them vividly in his watercolour paintings.

Ong has participated in group and solo exhibitions in Singapore, the United States, China, the United Kingdom, Japan, Australia, Belgium, Germany, France, the Middle East, Taiwan, Hong Kong, and the ASEAN countries. His illustrious career is marked by local and international accolades, including: the prestigious national Cultural Medallion (1991), the Public Service Star for the Arts (Bintang Bhakti Masyarakat) conferred by the President of the Republic of Singapore (2004), the Excellence for Singapore Award (2000) by the Singapore Totalisator Board, the Singapore International Award (2001) by the Singapore International Foundation, the Supporter of the Arts Award (2001) by the National Arts Council, Singapore, the acclaimed Dolphin Fellowship (2000) and an astonishing nine other awards conferred by the American Watercolour Society (between 1983 – 2019).

Currently the honorary President of the Singapore Watercolour Society, following a long term as its President (1991-2001), Ong continues to actively promote watercolour with organisations and bodies around the world. The artist is also one of the founding members of the International Masters of Watercolor Association based in Shanghai. 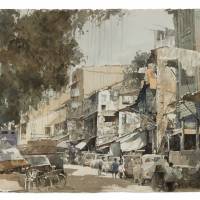